HOME ABOUT ME SIGN UP LEGAL STUFF GIVEAWAYS MARKET YOUR PRODUCT(S)
THE PINK STEERING WHEEL CHRONICLES - A Top 20 "Hot New Pick" on Amazon
Renting with Pets: Which Are the Best Cities? 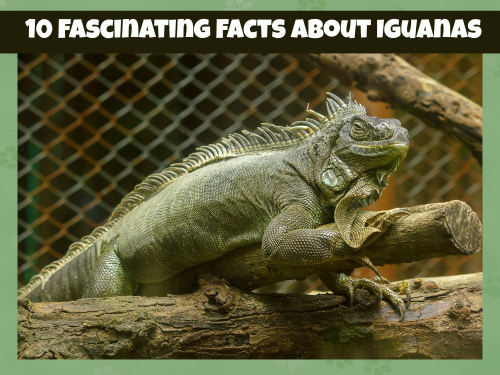 Guest author: James Alston
ExoticDirect pet insurance have collected ten of the most interesting, funny, and downright weird facts about iguanas for your pleasure. So put the kettle on and prepare to be amazed (or at least mildly interested) by these wonderful animals...
1. Iguanas can get rather big
The longest iguana, the green iguana, can grow up to two metres long from nose to tail. However, the heaviest iguana is the blue iguana, which can weigh a hefty 15 kilograms. That’s enough to do some bicep curls with (though we don’t recommend working out with an iguana).
But they aren’t all so big. The smallest iguana, the spiny tailed iguana, can be as small as 12 centimetres long, but usually grow up to around 1 metre long.
2. But they can quickly lose a lot of length…
Famously, iguanas (and other lizards) can detach their tails when caught by a predator in order to escape. Iguana tails usually grow back after detachment, but not to the same size or shape - they’re often darker in colour than they were before.
Iguana owners have reported pet iguanas who have exhibited this same behaviour. Sometimes iguanas do this themselves, usually by accident as a result of being kept in a cage that’s too small. This may also happen when the iguana feels scared or threatened - after all, it’s a defense mechanism.
It can be a little disconcerting, as the tail shakes and wiggles on the floor after detaching. (In the wild, this is to distract the predator.) However, you can easily treat your iguana by stopping the bleeding and treating the wound. 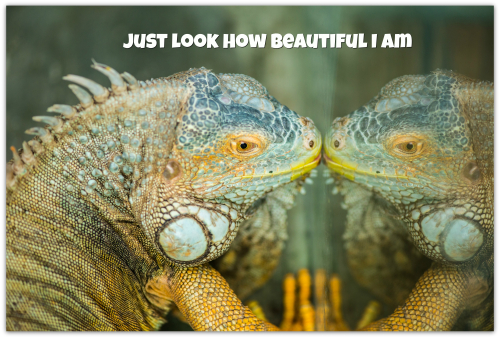 3. And some of them are rapid!
The Black Spiny-Tailed iguana is an iguana native to Mexico and Central America. Capable of growing up to 1.3 metres, the iguana has been recognised as the fastest-running species of lizard, with maximum sprint speeds of just under 35 kilometres an hour. Now that’s quick!
Amazingly, the Black Spiny-Tail is known to eat the fruit and live in the limbs of the Manchineel, which was named by the Guiness Book of World Records as the most dangerous tree alive due to its poisonous nature.
4. But they don’t always run from a fight
When cornered, iguanas may lash out to defend themselves. Iguanas have sharp teeth, sharp spines that run down their back, and powerful tails.
Though they use their tails as a defense mechanism, they also use them to whack predators away. They’ll also bite when cornered. So don’t pick a fight with an iguana! 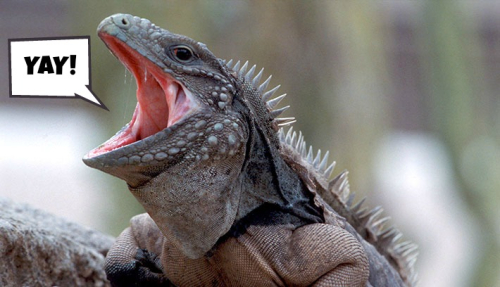 5. They like it warm (Who doesn’t?!)
Like most of us, iguanas enjoy warmer temperatures. For this reason, they’re found predominantly in Central and South America, though they can also be found in the Galapagos Islands, Fiji, Madagascar and the Caribbean. If you’re looking to spot one, head to tropical or subtropical forests, deserts or coastlines.
Due to accidental introduction (reportedly by people setting their pets loose!), iguanas now run free in some parts of southern Florida, too! If you’ve a pet iguana, please make sure not to let it out - especially in rainy Britain.
6. Most iguanas are vegans
Actually the correct term is herbivores, meaning they favour vegetation - flowers, fruits and leaves, generally. Marine iguanas find food by scraping algae from rocks or by eating seaweed.
However, if the opportunity arises, iguanas like to eat smaller animals, eggs and insectivores. Sadly these are not particularly healthy for them, and are generally on the ‘naughty but nice list”. A bit like chocolate and crisps for us! 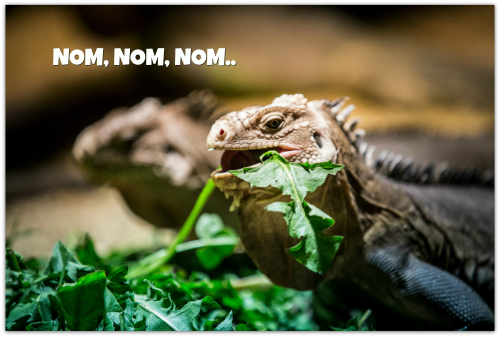 7. Iguanas have a third eye
That’s right - but not the kind of third eye conspiracy theorists talk about. On the top of their head iguanas have what is called a parietal eye.
While this eye can’t make out details, it can differentiate between dark and light. The eye is used for regulating the circadian rhythms, and it helps to produce hormones for thermoregulation - meaning it helps regulate the body temperature of the iguana even when the temperature of the surrounding environment is very different.
Many other animals have a third eye, including frogs, salamanders, and sharks. Mammals don’t have them, but one of our closest relatives, the therapsids, who are now extinct, did have them.
8. They’re tough little creatures
While it may seem like iguanas are a bit delicate because their tails keep falling off, the reverse is actually true. They have a higher relative biting force in comparison to other carnivorous and omnivorous reptiles, which helps them to acquire and digest plant matter.
This has been achieved through years of evolution by the strengthening and widening of the skull. This means the skull can withstand stronger forces.
The iguana’s stronger skull bone may explain why some iguanas can fall from great heights and survive relatively unscathed. The green iguana, for instance, has been observed falling from as high as 12 metres and surviving. 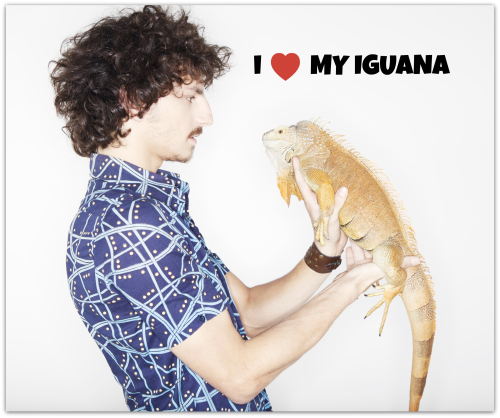 9. They like their eggs
The amount of offspring a single iguana will produce varies among species. Iguanas, like most lizards, lay eggs. Some, like the Rock iguana, lay between 5 and 20.
Eggs are burrowed away somewhere warm, and then the mother leaves. Baby iguanas are left to mature by themselves after they hatch, meaning many aren’t protected in the wild. They are often killed by predators before reaching maturity. Those that do live, survive for around 20 years in the wild, though they generally die younger when in captivity.
Other species, like the Green iguana, may produce up to 60 eggs, which makes one wonder how they could ever be at risk of extinction, based on sheer numbers alone. Unfortunately...
10. It’s not all good news
According to the International Union for the Conservation of Nature, iguanas are among the most endangered animals in the world. In 2012, the population of the Pink Land iguanawas counted and less than 200 mature members of this species were found. Some other populations have dropped by 50% in the last thirty to forty years.
The Marine iguana is perhaps the most famously endangered iguana. Where they predominantly nest is on a tourist beach on Isabela Island. The World Wildlife Organisation managed to extend a protected area there in order to conserve the habitat of the iguana, but there’s still work to be done.
Hopefully we won’t see this wonderful creature go extinct in the coming years. For now, wildlife organisations are working their hardest to save this animal from destruction. Let’s hope they succeed!
Own an Iguana? Get a quote to insure your Iguana for £1,000 of vet fees. Death and theft cover is also available. 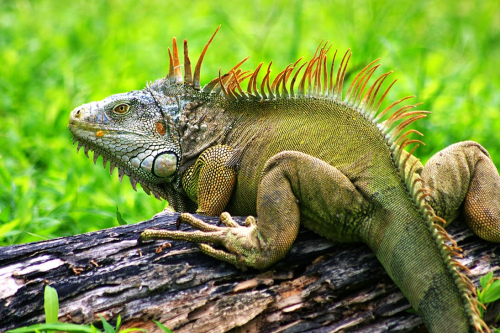 The Vital Marine Iguana Nesting Site on Isabela Island researched by Dr Kathryn Tosney www.issuu.com/claudiahodari/docs/tosney_2014_talk_to_park__spanishli which this article mentions in
Point 10 It’s All Not Good News
was recently bulldozed over by the local government with strong support from the local residents , into more public beach, in the village of Puerto Villamil on Isabela Island , Galápagos. www.twitter.com/Iguanawoman/status/1178466139317424129?s=20
SOS the Marine Iguanas of Puerto Villamil chances for survival need intervention, outcry against the destruction of this crucial habitat and dispersal of this Ecocide from all Iguana lovers worldwide.