HOME ABOUT ME SIGN UP LEGAL STUFF SHOP MARKET YOUR PRODUCT(S)
Would Love to Get a Dog But Don’t Like the Shedding? Here are Some Breeds That Don’t Shed
8 Types Of Dog Behavior Explained

Neuronal episodes in dogs: This is what you should know about Acquired Metabolic Encephalopathy (AME) 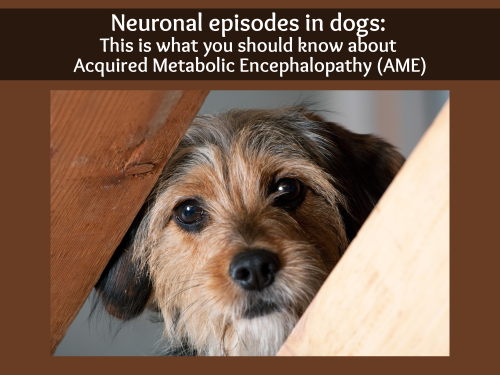 Small animals such as dogs can suffer from any type of neurological pathology, from disc extrusions in which they can stop walking, intracranial lesions, or metabolic encephalopathies. Neurology in this kind of animal is a significant effort for the professional veterinarian since patients are not capable of transmitting what they feel or where it bothers them.

In cases as delicate as these, it is necessary to go to a specialist who has knowledge of a Professional Master’s Degree in Small Animal Neurology  in order to show a correct diagnosis and set up a complete protocol in consultation that includes a complete neurological and general examination, a list of differential diagnoses and complementary tests that support the veterinary diagnosis, can be analytics, X-rays, ultrasound, computed tomography, or magnetic resonance imaging.

The specific case of metabolic encephalopathies is a complex disturbance of the central nervous system that may result from portosystemic shunting, hepatic failure, hypoglycemia, or urea cycle enzyme deficiency. Due to this failure, the metabolic detoxification process is impeded and altered in the blood that passes through the systemic circulation.

The concept of ’acquired metabolic encephalopathy’ (AME) refers to clinical evidence of brain dysfunction caused by disease in another organ or system of the brain organism.

What are the symptoms of AME?

The dogs who have this disease present symptoms as signs of liver dysfunction such as vomiting, diarrhea, weight loss, polyuria, and polydipsia. Also, there is a change in appetite or body condition, which can range from anorexia to polyphagia, or increased weight, respectively.

In specific cases, when dogs suffer from paraneoplastic hypoglycemia masses of distinct kinds could be detected, they can be bowel, liver masses, or lymphadenopathy. On the other hand, in dogs with hypertension and stroke (CVA) lesions can be seen ocular, hemorrhages of the anterior and posterior chamber of the eye, retinal detachment, secondary anterior uveitis, or in severe cases: papilledema.

The acquired metabolic encephalopathy occurs because of hemorrhage of the mechanisms of homeostasis that preceded the chemical physiology of the brain, a metabolically active organ that is extremely sensitive to changes in energy supply and blood flow.

Lab tests are important with the main goal of finding the cause of AME, for patients requiring urgent treatment such as anemia, hypoproteinemia, hypoglycemia, and hypotension can be quickly found. It is not common that the results of the laboratory investigation are normal, so if it occurs a dog with clinical signs of bilateral and symmetric or diffuse forebrain dysfunction, and the result of hematology, biochemistry, and urinalysis do not present significant abnormalities, it could be a toxic encephalopathy or structural brain abnormality.

Let us talk about the brain

The brain only stands for 2% of the body mass, but nevertheless, cerebral blood flow accounts for 15-18% of cardiac expenditure and cerebral metabolism consumes 20% of oxygen and 25% of glucose. That said, cerebral ischemia can cause reduced perfusion, neuroglycopenia, and increased carbon dioxide concentration.

This organ has a limited supply of glycogen, which is converted to lactate to supply energy in case of hypoglycemia, and if it is severe, the reserves can be depleted which can cause the release of excitotoxic neurotransmitters, that can produce biochemical reactions that lead to brain necrosis with or without infarction, it can be due to vascular occlusion or hemorrhage due to compromised vascular wall integrity.

There is a possibility to reverse ischemic injury depending on the severity of the flow decrease blood and duration of injury, but if not, irreversible ischemic injury leads to necrosis of the brain area affected. In dogs, systemic hypertension involves different endocrine and metabolic disorders related to diabetes mellitus, hyperadrenocorticism, and pheochromocytoma that can cause a functional alteration of the myogenic mechanisms of autoregulation of the brain, causing hyper perfusion and vasogenic and interstitial brain edema. 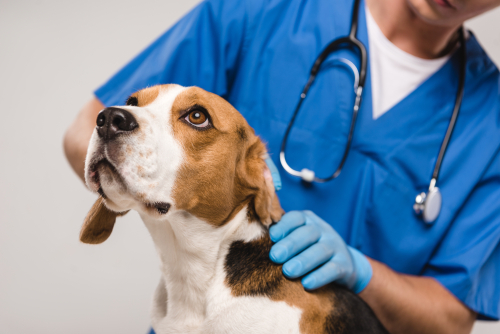 It is the consequence of a dysfunctional liver causing decreased metabolism of endogenous toxins, or secondary to a collateral portosystemic shunt, which causes toxins to bypass the liver. This accumulation causes alterations in brain function such as disruption of neurotransmission, compromise of blood-brain barrier and cerebral blood flow disturbances.

Different neurotoxins are implicated in this pathogenic such as aromatic amino acids, serotonin, endogenous benzodiazepines, manganese, and ammonium. If the liver's ability to synthesize urea is impaired, a major detoxification pathway is found in astrocytes, which metabolize ammonia to glutamine, a potent osmolyte, that accumulates in the astrocyte causing intracellular edema and altering the function of the astrocyte in neurotransmission.

The consequence of hyperammonemia is that it produces reactive oxygen species that alter cell membranes, mitochondrial permeability, and contribute to the development of cerebral edema.

It must follow three actions, the first is to restore and keep the homeostatic vital functions, the second one is to initiate treatment of the underlying etiology, and the third is to administer symptomatic treatment of associated complications. The most important thing is to stabilize the ventilation, volemia, blood pressure, and any electrolyte or acid-base imbalance.

The importance of ammonia in pathophysiology is made clear by the fact that much of the treatment is directed at reducing its production or absorption, that is why should be administered balanced diet, restricted in proteins, as they can be the prescription diets for liver pathologies or such as those formulated for puppies or for convalescent, as well as dividing the ration into several doses a day.

In conclusion, it is important to seek expert advice on clinical signs suggestive of diffuse forebrain dysfunction, with or without systemic symptoms, that may raise suspicion of AME. Different tests and analyzes must be carried out to find abnormalities that allow the cause to be found and the definitive diagnosis to be issued. If an etiological treatment is instituted quickly and supportive measures are implemented necessary it will be possible to reverse the neurological dysfunction.

The perfect blog for educative articles about your paw buddy.