HOME ABOUT ME SIGN UP LEGAL STUFF SHOP MARKET YOUR PRODUCT(S)
How To Live With a Pup In a Tiny Home
Caring For Your Horse: The Ultimate Guide To Feeding Treats

Tips And Tricks To Safely Breakup A Dog Fight 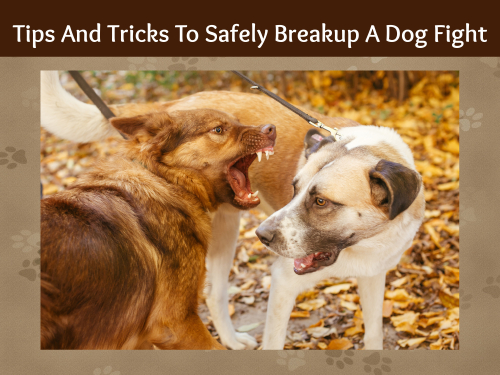 There's no doubt you already know just how severe and traumatizing a dog fight can be as a loving pet owner. You may already have all the other details of dog ownership under control, such as how to properly clean and groom your pet while providing an adequately nutritious diet. However, breaking up a dog fight is one of the more overlooked factors of dog ownership, as we all tend to hope we won't encounter such an unfortunate instance. Although, if you want to walk your four-legged friend with confidence, these tips and tricks to break up a dog fight will serve you well.

Carry Dog Pepper Spray With You

Dog pepper spray, or dog mace, is similar to regular pepper spray. Carrying a can of this innovative defense spray with you when taking your pet for walks can help you break up a dog fight instantly, as both canines will likely be disabled due to the defense formula. However, this spray may be enough to stop a fight, yet it is not potent enough to cause any lasting injuries for either animal. You will be able to use the spray to stop the fight and get your pup to safety. It is best to keep this spray with you each time you take your pet for a walk.

One of the best and most commonly used practices to break up a dog fight is to throw water on the fighting animals. The shock is often enough to frighten both canines without causing either animal harm. However, this technique is most effective if you are the owner of both dogs. It's improbable you will have a bucket of water on hand while taking your pup for a walk. However, knowing this trick can help you break up dogfights safely in some situations. 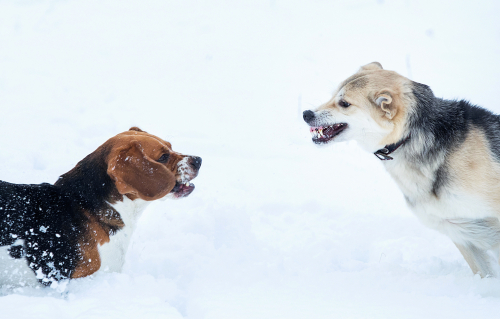 Another effective way to break up a dog fight is the wheelbarrow method. However, this method requires two adult individuals, and therefore, won't be effective if the attacking canine is a stray or not accompanied by its owner. The wheelbarrow method requires each adult to grab onto the fighting dogs' hind legs, raise them, and walk backward. Both dog owners will then need to restrain their pets and leave the situation immediately. This method is also somewhat more challenging to achieve safely if both dogs are large breeds. However, it is an effective method to dissolve a dog fight without further harming either canine safely.

Place A Barrier Between Fighting Canines

Should a dog fight begin and you can identify a large barrier item, such as a garbage can lid or a large piece of board, you can place this barrier between the fighting dogs. Because the dogs will not be able to see one another, the fight will dissolve. However, you would also require another adult's assistance to remove one of the canines before the fight continues. This is a quick method of distracting the fighting dogs, and other steps are essential to get both animals home safely and out of harm's way.

Tips To Prevent A Fight

Prevention is better than cure, and finding yourself breaking up a dog fight is almost always followed by a heartbreaking trip to the vet to treat the injuries. So, even though learning methods of breaking up dog fights is essential, regardless of the breed of dog you have, you should also learn how to prevent fights from starting as an initial precaution. Should you encounter another canine while walking your furry friend, you should watch for warning signs such as snarled teeth, raised hair, stiffness, growling, and staring.

Your dog will let you know in their own way that they sense danger and may feel the need to protect themselves and you from a potential threat. Should you identify these warning signs, it is best to cut your walk short and return home, avoiding the other dog as much as possible. In addition to this, you must remain calm as your pet will sense your stress or fear and feel even more fuelled up to protect their beloved owner.

Actions To Avoid When Breaking Up A Dog Fight

Specific actions can further fuel a dog fight, putting yourself and both canines in even more danger. Unfortunately, many of these actions may seem instinctual to humans hoping to stop a fight. Firstly, it is a dangerous mistake to try to break up a fight by putting yourself between the fighting dogs as even your own loyal canine will attack you in this instance as they are likely blindly attacking as a defense.

In addition to this, you should never reach towards the animals' snouts to try to separate them as you will get bitten in the process. It is also best to keep your face away from the fighting dogs to prevent severe injuries to yourself. And lastly, grabbing either dog by the tail is a fatal mistake as the dog will turn to attack you as an instinctual reaction. 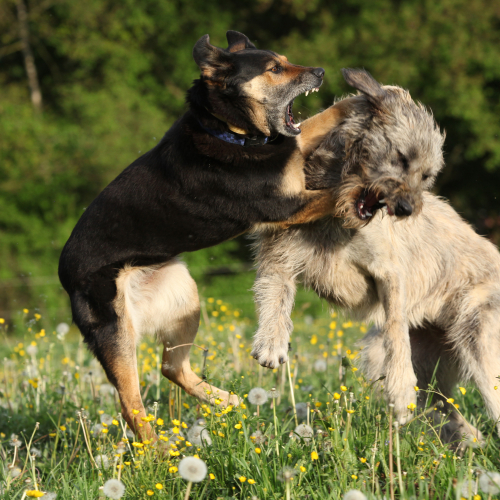 Steps To Take After Breaking Up A Dog Fight

Once you have successfully broken up a dog fight, it is vital to take your pup to the vet immediately. Even if you don't identify any severe injuries, your canine may still have wounds that need to be treated. Whether your dog has long or short hair, even a small bite can become infected quite quickly. Infections can also fester and lead to more severe health concerns and even amputation of a limb in certain instances.

You should also ensure the owner of the other canine takes their pet for a checkup. Even though dog fights can lead to injury lawsuits, it is best to calmly communicate with the canine owner in question to settle any concerns regarding vet care bills and steps to avoid the instance from transpiring again in the future. If the dog fight ensued with a stray canine, you should immediately contact authorities to have the stray dog taken to a vet to tend to any wounds while also providing the homeless with shelter and food.

This is such a great article! Thanks for the suggestions.