Can Goldfish Live In a Bowl Without a Filter? 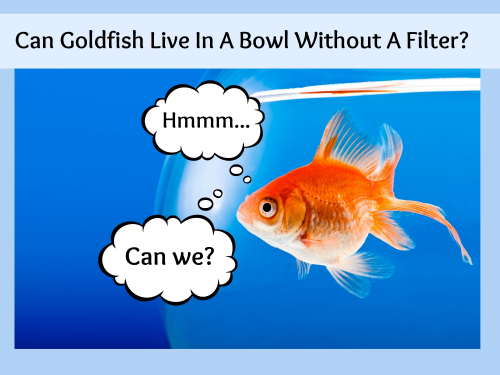 Many people choose aquarium fish as pets. Fish are relatively low-maintenance creatures when compared with dogs and cats, and there are reports of some goldies living for up to 20 years with proper care. However, even the humble goldfish does have some specific care requirements that are essential for its health and longevity.

Traditionally, goldfish were displayed in small glass bowls, often with nothing but a few ornaments and maybe a plant for company. These days, modern fishkeeping has changed all that for the better. So, can goldfish live in a bowl without a filter?

Read this guide to find out why a bowl is not the best environment for a goldfish and learn why a filter is so important for goldfish health.

What's Wrong With a Goldfish Bowl?

There are two problems with keeping a goldfish in a bowl.

Goldfish are descended from a species of wild Prussian carp, and most of the 100 plus types of goldfish grow pretty big.

For example, the typical size of a mature, egg-shaped fantail goldfish is up to six inches, and that’s without taking into account their luxuriant trailing fins. Comet gold fishes are actually a pond fish and can grow to measure up to 12 inches in length!

Goldfish grow quickly, too, so that cute inch-long creature you bring home from the pet shop will rapidly become far too big for a bowl. Also, goldfish are pretty active fish, and they need plenty of swimming space that they simply won’t have in a bowl.

It’s not entirely true that goldfish only grow to fit the size of the container they are kept in. Although the growth rate will slow down, the fish will continue to get larger until they outgrow the bowl.

Ideally, you should allow one gallon of water per inch of fish, and you clearly can’t do that in a small goldfish bowl.

Goldfish are very dirty fish that produce a lot of waste. That waste decomposes in the water, producing ammonia, nitrites, and nitrates, all of which are toxic to fish. A goldfish in a bowl of dirty water won’t last long, as the ammonia will burn the unfortunate creature’s gills, leaving the fish unable to breathe, and ultimately leading to a slow and painful death.

In theory, you could change some of the water every couple of days. That would help for a short while, but the bigger the fish grows, the more waste it will produce until even daily water changes aren’t enough.

Unfortunately, a goldfish bowl is too small to accommodate a filter.

How Can A Filter Help?

The mechanical element of a filter system pumps water around the tank, drawing the water through the filter media inside the system and helping to oxygenate the environment.

The biological element of the filter comprises bacteria that process the chemical byproducts produced by fish waste, plant debris, and uneaten food via the Nitrogen Cycle.

The Nitrogen Cycle first produces ammonia, which is extremely poisonous to your fish if levels get too high. Nitrosomonas bacteria break down ammonia into nitrites. Nitrites are also toxic to fish and other aquarium inhabitants, and these are converted by Nitrobacter bacteria into less harmful nitrates. To remove nitrates, you must carry out 25% partial water changes every week so that levels don’t exceed 20ppm (parts per million).

Some filter systems contain activated carbon or something similar that removes heavy metals and chemical fish medications from the water.

Your filtration system should be the correct size for your fish tank. The minimum requirement for an efficient filter is one that circulates the entire volume of water in the tank at least four times per hour. For very dirty fish, such as goldfish, we recommend a slightly more powerful system than that. 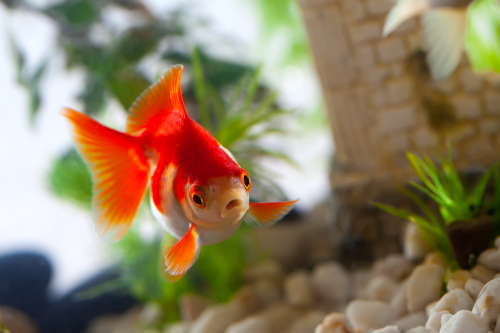 So, a bowl is not the best environment for a goldfish. These are large fish that need plenty of space to swim, as well as a highly efficient filtration system to keep the water clean, healthy, and well oxygenated. And a bowl cannot provide either of those.

Instead, you need to house pet goldfish in a roomy tank with a proper three-stage filtration system.

It’s also not recommended to keep only one goldfish. These are highly social fishes that are happiest when kept in small groups or at least in a pair. Remember to allow at least one gallon of water per inch of fish, and bear in mind that goldfish can grow pretty large when fully mature.