HOME ABOUT ME SIGN UP LEGAL STUFF SHOP MARKET YOUR PRODUCT(S)
Book Suggestion: Being a Dog - Following the Dog Into a World of Smell
Win a DOUG The PUG Calendar - Celebrating National Pug Day!

YES! You Can Dress Up Your Bearded Dragon! With GetSTUFT! 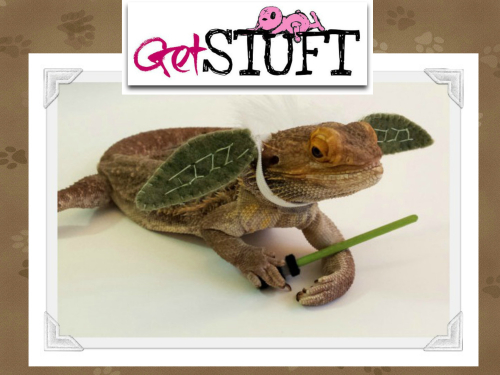 I have some news.  I have fallen in love.  Seriously.  Not with this guy but with of all things, Bearded Dragons.  I attended the Manitoba Reptile Breeders Expo a couple of weeks back and had the pleasure of chatting with a variety of reptile lovers about the love they have for their somewhat unusual pets.   I even convinced my mom to hold one (and she isn't the reptile holding kind!) and no - she wouldn't let me post a photo here.  I'm working on that. 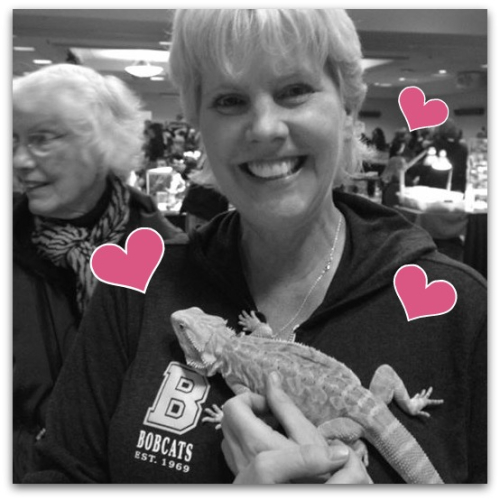 While at the Expo, I visited a vendor with displayed wares that just melted my heart.  Serious heart meltage. Is that a word?  She creates little costumes and such for bearded dragons and with me being the quirky person that I am, I just had to connect.   Meet Jenn from GetSTUFT.   I had her send me a write-up about how she ended up with her business and the passion behind it all.  Thank you Jenn!

GetSTUFT and How I Got Started..

One afternoon we had our bearded dragons out and our cantankerous lil guy Khal was doing his favourite thing; climbing the furniture. He was sitting on the edge of an armchair and looking for a place to jump down. He spotted the cat lying below and decided she would make a good landing pad. She didn't take so kindly to this and shot out of her bed with Khal clinging onto her for dear life. We laughed as he rode her around the living room like a miniature cowboy on a bucking bronco until he finally had enough and hopped to safety. I made a joke to my daughters about how funny it would be to have a little cowboy suit for him and they told me I should make one. I had already been operating GetSTUFT for several years, making plushies and other pop culture related fare so being that I had an abundance of felt I fashioned a pair of cowboy boots. Unfortunately it didn't work out as his nails continuously got caught in the fabric as I tried to fit them on him. I swear he looked relieved!

After that we really didn't talk much more about it and it wasn't until a year later that the idea for reptile accessories came up. 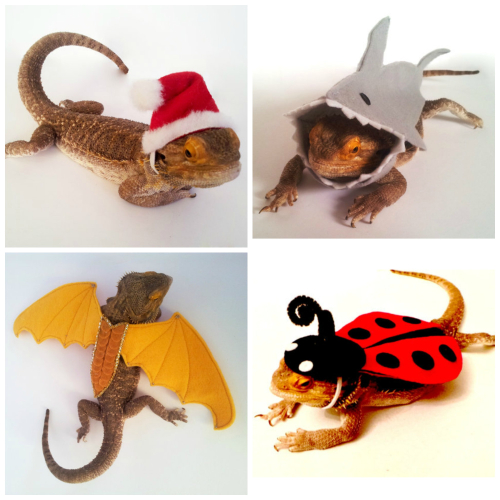 In September of 2013, I was making one of our almost weekly regular trips to Winnipeg Reptiles to get food and supplies for our ever growing brood of lizards and one of the owners (Chantal Trizpit) told me about the annual Manitoba Reptile Breeders Expo put on by themselves and Prairie Exotics. I had been mentioning to her about GetSTUFT and the upcoming comic convention I was going to be selling at when she asked if I might be interested in a table at their show. As long as I had some reptile related items she said it was all fair game for the rest. She joked about how I should make some reptile accessories and I told her about my endeavors with the cowboy boots. Thanks to her, my wheels started turning almost immediately and I went home and drew up the pattern to my first pair of dragon wings.

We attended the show and the response was overwhelming! People absolutely loved the idea of dressing up their reptiles and I had almost sold out by the end of the weekend! I went home after and set up listings for my existing Etsy shop and the response was awesome there too! The rest was history and my reptile items have surpassed my pop culture items completely in terms of sales. I get a real boost in orders around September for my costumes and in the spring for leashes. Dragon wings are a pretty popular year round item and I've made custom orders for cats and even plush toys! I recently sent off a pair to a very prominent music label owner.

We acquired our first reptile through Kijiji and have since rescued almost exclusively. Three of our four beardies were said to have mean dispositions (which for two were untrue) and the third unfortunately was a result of his upbringing in the home we acquired him from. Most of the time these behavioural issues are caused by an inability to properly handle the reptile. Just like any animal, rough handling, loud noises and not respecting their space will cause them to become defensive and if this is a regular occurrence they end up incredibly stressed and constantly trying to protect themselves. In our case, even after 5+ years of regular, loving handling in a safe environment, he still is not a dragon we have ever felt comfortable bringing to a show as he can still be unpredictable at times. A very sad reality considering it only took about a year to make him this way. Our worst case of neglect though is our elderly bearded dragon Charlie. In his very first home he was not given proper care (nutritionally etc) and he developed quite severe MBD (Metabolic Bone Disease). Without a balanced diet, calcium supplements and proper UV lighting reptiles develop MBD which causes tremors in its early stages and in its latter stages, it causes bones to grow soft and deform limiting mobility and even life span. Some get so bad they develop rubber jaw and have to be euthanized as they can't eat. Thankfully Charlie wasn't affected quite to that degree but his spine has curved considerably and he has limited mobility in his back legs. He pulls himself around mostly using his arms and has had seizures as he's grown older. He was given to us by the most loving family and he is a credit to them. She recognized that he was not being cared for properly, adopted him right away and they set to work saving him. Unfortunately a few years later they were moving and unable to take him with them so as hard as it was, he found his forever home with us.

Currently our brood consists of three bearded dragons (our very first little guy passed from kidney cancer last year), a Chinese water dragon, leopard gecko, two ball python snakes, a rose hair tarantula and our newest family member.. a crested gecko. Since becoming a part of the fantastic reptile community in Manitoba, we have purchased a few animals from awesome breeders we've come to know, but we were also introduced to Steve Rempel who runs Prairie Exotics, where he not only rescues unwanted animals but goes around and educates people about reptiles and proper care. We adopted the dragon we had at this year's show from him as well as our very first snake the year previous. 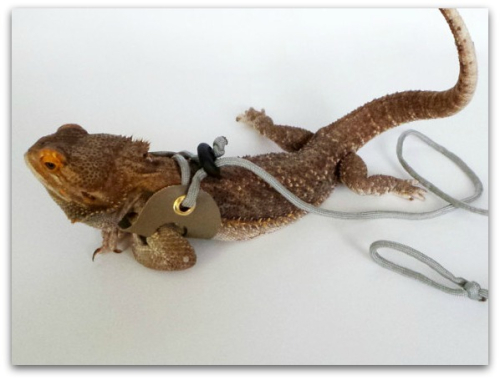 And just to add: 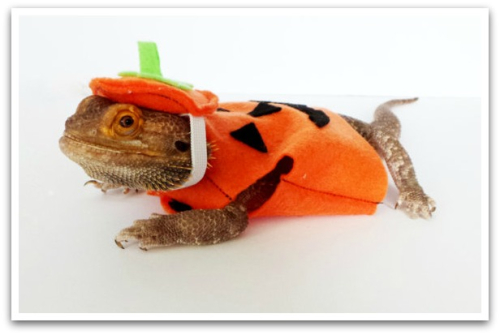 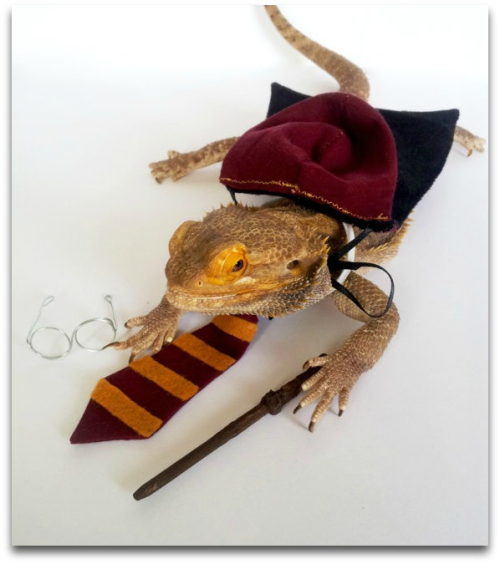 Thank you Jenn for sharing your story and your obvious passion for these adoring creatures.

You can check out her Etsy Shop - GetSTUFT and her Facebook Page too.

Oh my dawg we are cracking up
Lily & Edward