Tips to Deter the Poop Perps at Your Complex 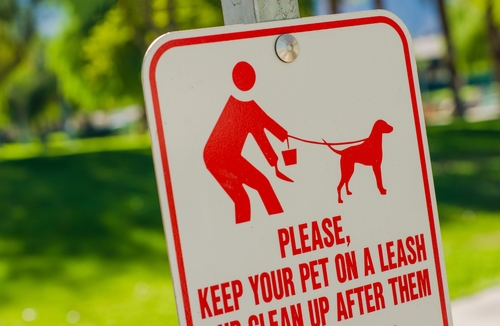 Nobody likes to suddenly find themselves the owner of a poop-covered shoe, but it can be difficult when residents of your property don't scoop their dogs' feces. And worse yet, it can actually be harmful to leave those messy presents behind. Pet poop can spread disease, damage landscaping and ruin a perfectly good area, and besides, it's pretty gross to walk on dog poop. Also, sometimes we don't notice if we've stepped in it, which means that it can get tracked indoors through hallways, other common areas or within individual units. The good news is that there are a few strategies you can put in place as a complex manager or owner to keep the grounds inviting and usable — and poop free.

Make picking up after your pet a rule that must be followed, but if you don't have adequate signage around your property, your residents may not be totally aware that they should be picking up their pet's poop. A line of text in the rental agreement isn't enough because it's not in front of them on a daily basis. Yes, it's common courtesy but it doesn't mean people do it. Provide signs near the exits of your buildings as well as outdoors in common areas, but don't be harsh or threatening. Another idea is to put a reminder in a monthly newsletter that every resident receives, outlining what dog poop can and does do to the environment.

If you catch someone leaving a gift behind after they've taken the dog out for a stroll, don't get aggressive. Sharing the complex's rules in a non-emotional, non-confrontational manner will usually get better results than being rude or coarse, and while some residents may be less prone to changing habits, your best bet is to be firm, but not angry.

Purchase and install a quality security system in your complex's common areas. Fortunately, security cameras from Lorex have cameras you can purchase outright without a need for a monthly subscription, and better yet, some come with night vision, so you can catch tenants even when it's dark outside. Be sure to post notices that there are cameras in the area — not only to give residents a head's up they may be viewed or recorded, but also since it will likely help cut down on the chances that your complex will be littered with dog poop.

Make it easier for your residents to clean up after their pets by providing dog poop bags and trash cans (or entire dog waste stations) in easily accessible places. Sometimes folks stroll out with their dogs and forget to bring a bag of their own, so keeping poop bags in sight will help remind them that if their dog makes a deposit, they have to cash it in. This small investment can really pay off and can give your residents some ownership and responsibility. Make sure that if you catch a resident using your dog waste system, let him or her know that you appreciate the time they've taken to make the area a better place.