HOME ABOUT ME SIGN UP LEGAL STUFF SHOP MARKET YOUR PRODUCT(S)
Need a Break? Watch a Video about Hedgehogs
Sophisticated Pup - Dog Fashion At Its Finest!

Are your pets allowed to sleep in bed with you? 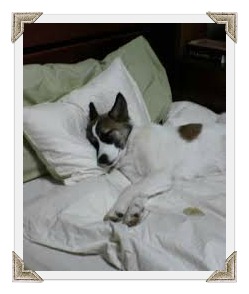 Disclosure: This post is sponsored by the Sealy Teramo 1400 mattress, awarded the Which Best Buy for Mattresses in June 2015.

I recently read a piece about how many people allow their pets to sleep in their bed with them, apparently  a whopping 10% of people (in a survey of 1000) even go to the full extent of kicking their partners out of bed to make room for their furry chums.  Which made me wonder how many people really do allow their pets to sleep in bed with them? As a child, come bed time you would normally find my trusty ginger tom cat curled up in my bed, but my mother would always oust him before she headed to bed herself and as an adult I tend to employ the same strategy with pets. I know all to well that the ratio for bed space taken relative to pet size, is squewed beyond all rational sense to at least 3:1 in the pets favour! Another favoured activity of one of my cats was to sneak onto the bed in the morning and play a game, in which she pounced on any body part that moved under the covers!

As it had piqued my interest, I read further around the topic and found a piece on the UK Huffington Post. The story is that a woman was on the verge of declaring that her child had Autism, only to discover that their pets were keeping him awake by stealing his pillows! It was the lack of sleep that was changing his behaviour and causing the temper tantrums.  While pillow theft is an extreme example of a pet’s antisocial bed manners, squirming would probably the most normal complaint. Which is where a pocket sprung mattress can really come in handy! As the springs are individually housed, meaning that the body can move independently, affecting only the springs that it is in contact with.

Do you allow your pet to share your bed? Is it at the expense of your partner? If you do, do you actually get a good nights sleep? I would love to hear in the comments!

About Cassie Taylor: She is a Lancashire (UK) based writer, who is the proud owner of two Lurchers (Clarke and Gable)

My oldest cat wasn't allowed to sleep in the bed as due to a urinary condition he would pee in it. This also prevented my other cat from sleeping in the room. Now that Kasey has passed I allow Smokey to sleep with me and usually he'll lay beside me when I first get into bed but usually he sleeps elsewhere afterwards.

Although I don't have pets of my own, I house and pet sit quite a bit, and this question is a big one. We always honor home owners requests. If dogs or cats are a no-no on the beds, we respect that.

That said, I've had dogs keep me up at night from their snoring - just like that poor child who's pillows were stolen!

We allow our humans to sleep with us. ;)

Oscar use to sleep in my bed but as he has gotten older he prefers a more solid surface which is odd. He does have a nice doggie bed though, meant for senior dogs.

Since we have 4 dogs, they sleep in the living room and family room. We don't have room for them in our bed and my boyfriend doesn't want to choose. But I know that if he could, Scout would join us :)