Why Does My Dog Roll in Stinky Stuff 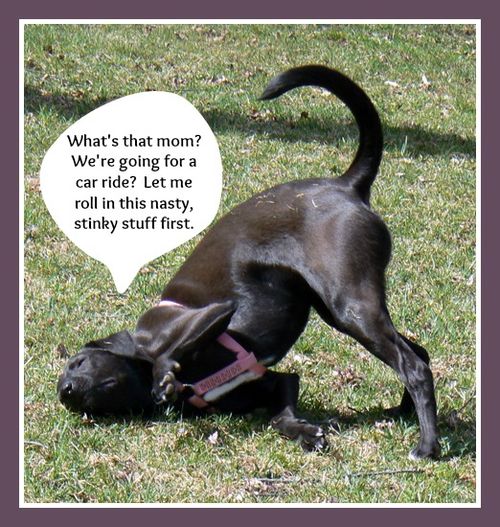 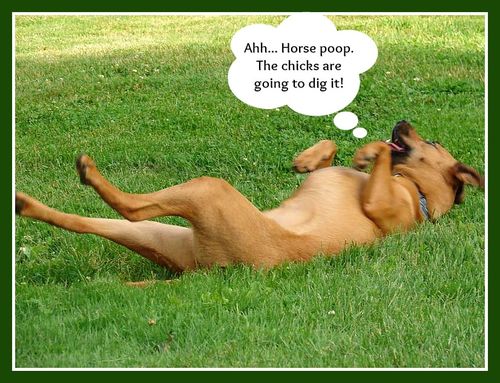 Many of you who are dog owners know what I am talking about when I mention "rolling in stinky stuff". I always joke that Oscar does it for the laaaadies but wonder really WHY, WHY, WHY.  Cow poop, horse poop, cat poop, dead little animals, stinky mushrooms..... The choices are endless.  The nastiest thing Oscar rolled in was what looked like an old balony sandwich, rotting away in a school field.  He even stopped to take a nibble. It would be like spraying yourself with Brut and taking a shot of it too.

I did some research and found this great article from Pedigree that I'm passing along.

Have you ever caught your dog rolling around in poop? Believe it or not, this behavior is quite common and very natural. Many believe it's instinctual behavior, harkening back to the days when your dog’s wild ancestors would mask their scent to help them sneak up on their prey. Wolves, for example, have been observed rolling in animal carcasses or the droppings of plant-eating animals, to cover up their own smell during the hunt.

Here’s a related theory that also conjures up the pre-domesticated past of canines: wild dogs may have rolled around in smelly things to “tell” their pack mates where they’ve been and what they’ve encountered in their adventures. It’s his way of saying, “Hey, smell where I’ve been!”

What should you do about this behavior?

The important thing to remember is that rolling around in smelly things is a natural and normal behavior for dogs—no matter how the results may strike you (or your nose). Of course, that doesn’t mean that you have to live with a smelly dog. Though you shouldn’t punish this behavior, there are steps you can take to discourage it.

If your dog rolls around in his own feces, immediately clean up after him in the yard. When you’re out walking your dog, keep him on a short leash to prevent him from rolling around in another dog's poop or other smelly things you both might encounter. To discourage and ultimately stop him from rolling around in offensively odorous things, you could try to pair an unpleasant experience with his action. This can take the form of squirting him with a water bottle or using a citronella spray collar that can be operated via remote control (dogs absolutely hate the smell of citronella). If you use this method, make sure you squirt him as soon as he starts rolling.

You can also try anything your dog finds annoying, like making a loud and sudden noise. The key here is to be consistent and to start the “annoyance” as soon as he starts to roll around in something smelly. Once he starts to associate rolling around in smelly things with the unpleasant experience, chances are this behavior will quickly stop. And you can breathe easier.

So when Oscar does manage to roll in yucky stuff, it's bath-time for sure.

One product I really like is Magnifiscent Grooming and Finishing Splash.   They offer so many choices in scents and of course, the product is totally safe for your pets.  It's non-toxic, alcohol and paraben free. I won't tell you all the scents as they are so many, but please check out their website and see what they have to offer. 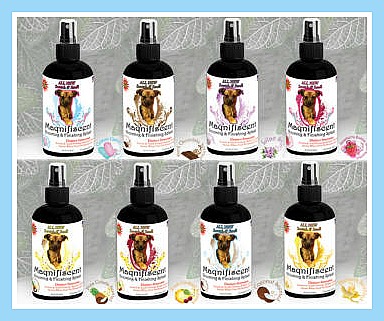 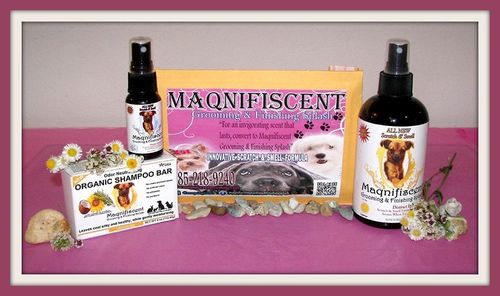 I really like that they are a family owned business.  Another thing about their company is they certainly have a happy customer base when you check out the Testimonials. 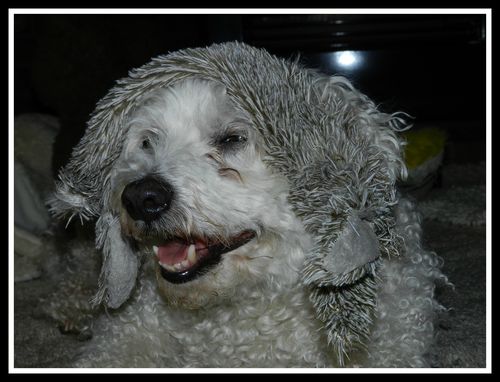 When Oscar rolls in a mystery substance, he cleans up pretty darn well for a 12 year old Bichon.   That thing on his head is "Squecky Squirrel".  He can roll in that anyday!

What sort of things has your dog rolled in?

We are also a small vet hospital in Melbourne. I was wandering around to see some stuff related to dog grooming. Honestly, I enjoyed reading your stuff and the caption of the funny dog images. Thanks for sharing this.

Thank you so much! I really love being The Pet Blog Lady. Brings me a lot of joy. :)

I Love your blog! I am an animal lover myself. Your blog made me smile:)