HOME ABOUT ME SIGN UP LEGAL STUFF SHOP MARKET YOUR PRODUCT(S)
All safe? Check! Tails all working? Check! Rescue Check-list
Do Magnets Stick to Armour? Cool Stuff from Build-A-Sign

Fix Your Kitten Early to Avoid the "Oops" 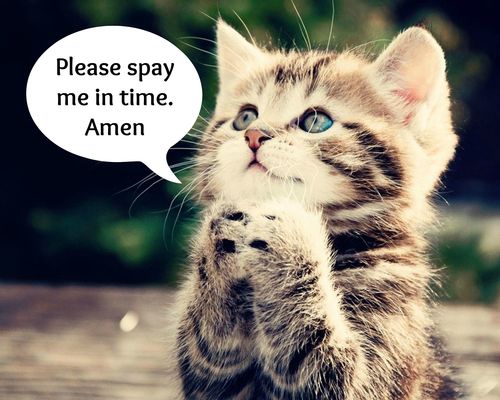 Kittens are early bloomers.  They play hard, learn fast, and sleep like fuzzy rocks.  You’ve seen them go from sound asleep to a full-out zoom in a matter of seconds?  They can also go from babyhood to parenthood in a matter of months ... five months, actually.  Then your baby’s having babies, and that’s a problem.

IPSOS research commissioned by PetSmart Charities says that an alarming percentage of unwanted litters occur because someone didn’t realize just how early a kitten can become pregnant.  Those “oops” litters contribute to a serious shortage of homes for millions of cats and kittens each year.  That early maturity can sneak up on you, as surprising as a cat toy on a dark floor, under your bare feet, before your coffee.

We scarcely see the change coming.  Ah, it seems like only last week that Fluffy was a thin little kitten, fiercely boxing into submission a purple felt mouse.  But five months go by before you know it and, not fully grown herself, Fluffy is now able to have her own babies.  You thought you had ages before you needed to think about spay or neuter surgery for your one kitten.  Now you’re faced with check-ups, vaccinations, special food and, yes, spay or neuter surgeries for three, four, or five more kittens. 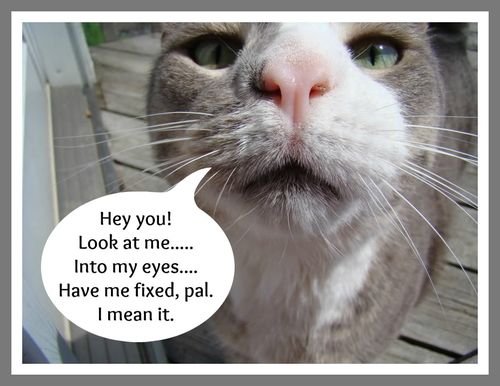 By the way, it does take two to tango; the boys are just as precocious.  Between four and six months, their own adolescence hits, and they’re ready to play their part in baby-making.  l remember the look of shock on one gentle woman’s face when I informed her that her adolescent kitten was pregnant. “But she’s never been outside!” she said.  “It’s impossible; she doesn’t even know any other cats except for her brother!”

Cats, as a species, are exceedingly efficient at reproduction.   A roaming male will travel for miles in a single day, driven to visit as many females as he can.  A female gets started early in life and, in many parts of the world, can have two or three litters every year as long as her health holds out.  Did I mention that she can get pregnant again while still nursing a litter?

It’s simple to avoid the whole thing: spay or neuter kittens before they’re five months old.  In fact, the Canadian Veterinary Medical Association has even recently announced that in most cases, male and female cats can be neutered prior to 5 months of age.

The benefits are simple — a longer, healthier life together for you and your cat, and fewer homeless kittens and cats in the world.  Everybody wins, except for that purple felt mouse which will soon be ambushed again by your fearless, clever teenager.

Kit Jenkins is a program manager at PetSmart Charities , a nonprofit, animal welfare organization that saves the lives of homeless pets through adoption and spay/neuter programs.Visit their website at www.petsmartcharities.org

Photos added by The Pet Blog Lady...that would be me!