HOME ABOUT ME SIGN UP LEGAL STUFF SHOP MARKET YOUR PRODUCT(S)
Simple Solution to the Poop Scooping Blues
Fiona ~ The Dog Who Changed the World. One Year Later.

Tales of a DogTrepreneur ~ Part One

How an unadoptable Labrador Retriever inspired our entrepreneurial spirit and motivated us to launch SlimDoggy.

Who knew that a scruffy Lab rescue could have such an impact on our lives, both personally and professionally?  You see, if we hadn’t found the big yellow lab Jack, there probably would be no SlimDoggy.  And he would probably still be in a shelter.  In this series of posts we will share the story of Jack and how he inspired us to start our company. 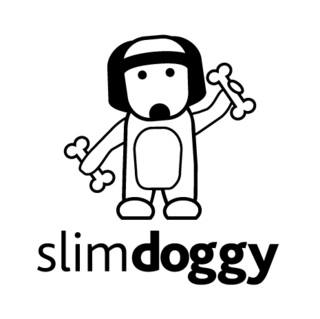 We had recently lost our beloved Tino to old age and decided that we were ready to fill the void by bringing a new dog into our home.  As we are active with local dog rescue organizations, we were committed to adopting a ‘homeless’ dog and were looking for a male to balance out our pack that consisted of myself, my wife and our black lab, Becca we had adopted about a year earlier. Becca was older and had pretty severe orthopedic issues, so we didn’t want a puppy. We knew we needed a ‘middle-aged’ dog, one with the maturity to be careful with her and not too rough.

To speed the process, we did some web searching and found a picture of a very handsome yellow lab named Suka on PetFinder. Suka was currently residing at the Canine Adoption and Rescue League (CARL), a no-kill shelter in Southern California.  He had a classic lab look although it appeared that he was very skinny and pretty scruffy, no doubt because he had been a stray and without a reliable source of food or care.  My wife and I decided that he was worth a look so we arranged to have him visit our home. 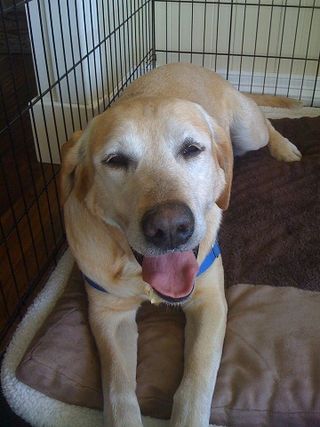 Imagine our surprise when he jumped out of the car into our front yard! He was one of the biggest and fattest labs that we had seen, a real dough-boy, wild-eyed and out of control, panting like a freight train from excitement and exertion.  In a nutshell, he was a train wreck.

Suka barely even noticed Becca and although she gave him the once over when he arrived, the two had no other interaction at all.  Suka just waddled around the yard and drooled (from panting) everywhere he went.

We learned that Suka had been with CARL for over a year.  He was placed a few times but was returned due to bad behaviors including digging, barking, mouthiness and more.  We also learned that Suka was on the anti-depressant medication Prozac (for his behavioral problems) and Rimadyl for joint pain.  We thanked the handlers for bringing him over and told them we would need to discuss whether or not Suka was a good fit.

After much discussion and considering the situation logically (right, not with our hearts at all!), we decided to give Suka a shot!  We knew he would be hard if not impossible to place and the longer he stayed in the shelter, the harder it would be for him to find his forever home.  We also hoped that Becca’s calm nature would rub off on him and we knew we could burn off some of that energy with exercise. 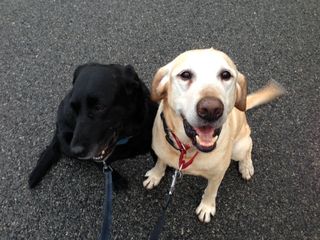 The first thing we did was change his name to “Jack”.  It just seemed to fit him better and seemed more appropriate than Suka.  Plus, it was only one syllable which would save our vocal cords given the amount of “corrections” we were anticipating we would have to make to properly acclimate Jack to our home.

Jack’s first few days at our home were difficult.  He panted continuously; he was hyperactive and just could not seem to settle down, much less relax.  At night, we kept him in a crate (with very luxurious bedding I might add) and he would sleep, but then wake frequently panting and emitting a soft yippy bark trying to get our attention. Eventually, we placed a sheet over the crate and that seemed to help tremendously. Dogs really like that ‘cave’ feeling and he still sleeps there every night even though he now has run of the house. 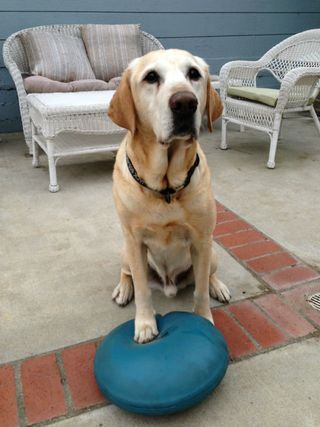 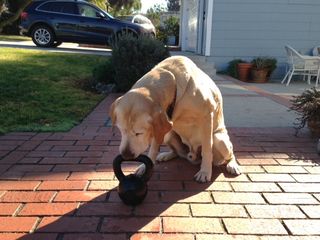 We really weren’t sure how this was going to evolve, but we knew two things: 1) Jack was not going to weigh 105 lbs. and 2) Jack was not going to remain on Prozac.  In my mind, the best way to approach both of these issues was with proper exercise and diet.  I needed a tool to help me determine a safe and steady weight loss strategy, one that accounted for Jack’s current and target weight and the exercise routine that we planned for him. Since he was older (8yrs) we knew we had to be careful of his joints and needed to introduce the exercises safely. Unfortunately, there was nothing available to provide us with any real data on doing this safely and correctly, and being a math guy I really wanted something more concrete, so as they say, “necessity is the mother of invention” and we set about to build our own. 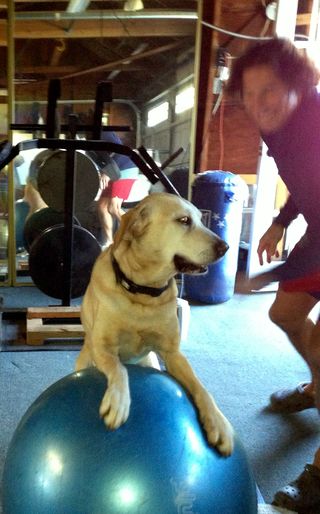 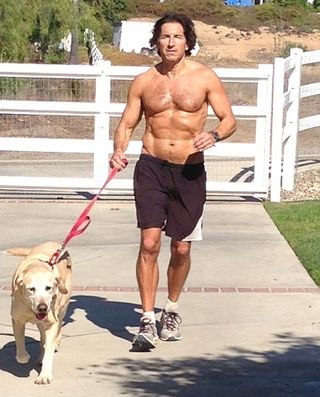 About the Author:  Stephen Pelletier is an experienced technology and start-up executive with a passion for health and fitness for people and pets.  He is the founder of SlimDoggy, which provides tools and tips to dog owners to help their dog achieve and maintain a healthy weight and a healthy and happy life.  Prior to that, he was SVP for LibreezeFitness, a curated directory of “the best of the web” health and fitness content.  Pelletier was also the founder and former CEO of FatTail, the premier provider of contract and inventory management, workflow, and reporting software for online publishers.

Steve and his family are active contributors to several LA area dog rescues.  He and his wife currently share their home with Jack and Maggie, two Labrador rescues who never cease to make them smile.

This is truly inspiring to read! It makes my heart happy to know that there are other lab lovers out there like myself and my husband. We love our two labs, one chocolate and one white, like they are our children. They were both super hyper as puppies too, but we found that a tennis ball can do wonders. Now that our labs are a little older they still chase their tennis balls but into the pool so it's easier on their doggie joints.

I was inspired on how hardwork and effort you put up to your bestfriend. They are the sweetest dogs aren't day, you have me motivated on training my dogs too!

What an inspiring story...getting the ap today to ensure my doggies are slimdoggies! Thank you for info

Cool story, thanks for sharing. Seems like Jack was a lucky dog. Or maybe Kate and Steve were the lucky ones? Looking forward to reading more about it.